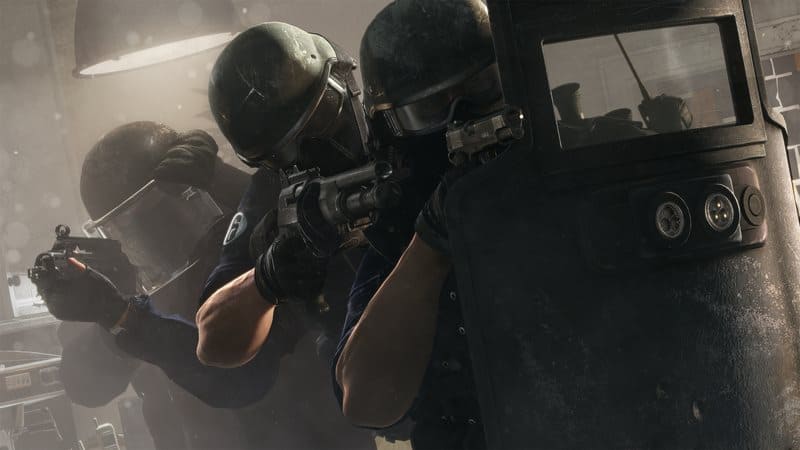 Tom Clancy’s Rainbox Six – Siege is the latest installment in the acclaimed first-person shooter franchise developed by Ubisoft Montreal Studios and optimized for the latest generation of consoles and the PC.

Inspired by counter-terrorist organizations from around the world, Rainbow Six – Siege invites players to master the art of strategic destruction. Anti-terrorist agents are trained to tackle extreme situations, such as rescuing hostages. They are experts in indoor environments and operate through tight formations, with an emphasis on destruction and coordinated attacks. Intense close quarters confrontations with the enemy, tactics, team play, explosive action and your life hanging by a thread are the keywords of this exciting game.

The Siege offers a whole new gameplay with Anti-Terrorism units from all over the world. Experience intense battles in tight spaces between the attackers and defenders. Defenders must transform their environment into a true fortress; place traps, fortify walls and build defensive systems to repel your attackers. The attacking team has more freedom than ever to take on this challenge. The combination of tactical maps, observation drones and an all-new reminder system gives you a variety of choices to achieve the goals. Work your way to your goal on your own or face your enemies with friends.

The highly anticipated Terrorist Hunt (TerroHunt) is back, bringing a new threat to the world of Rainbow Six: The White Masks. In TerroHunt you will experience new hostile situations that can be played solo or co-op up to four players. TerroHunt comes with gripping challenges, tough enemies and an addictive replay value. The ‘Siege Generator’ mixes modes, maps, time of day, challenges and much more to create a unique TerroHunt.

Unique Anti-Terrorism Operators have their own unique Siege skills. These are the world’s best operators and perform their roles with the utmost precision. They play a vital role in their unity.

Destruction is central to the siege gameplay. Ubisoft Montreal’s own Realblast engine lets you destroy environments as you wish. Get a view of the situation with new lines of fire created by, for example, collapsing walls. Barricaded doors are also no problem if you go straight through walls, ceilings or floors with a properly placed explosive. The damage is determined by the type of bullets and the power of the explosions. This will allow you to fight in completely new environments before you know it. Use this to your advantage and lead your team to victory!

Missions: Experience the gameplay of the Siege by playing missions as Lone Wolf or with your friends.