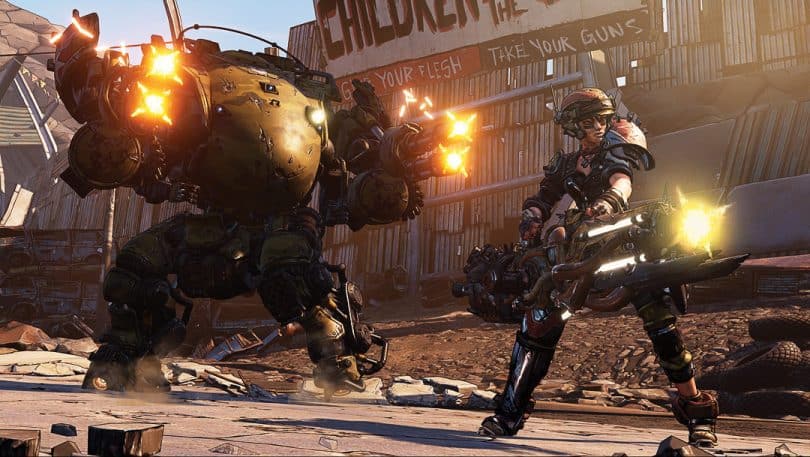 The classic shooter looter returns, with countless weapons and a brand new adventure full of mayhem! Blast your way through new worlds and enemies as one of four all-new Vault Hunters, the Borderlands’ ultimate treasure-hunting bosses, each with extensive skill trees, abilities and customization options. Play solo or with friends and take on bizarre enemies, score tons of loot and save your homeworld from the most ruthless cult leaders in the universe.

A wild ride full of chaos

Stop the extremist Calypso Twins from uniting the bandit clans and taking control of the universe’s greatest power. Only you, a Vault Hunter in search of adventure, have the weapons and allies to defeat them.

Your Vault Hunter, your play style

Become one of four unique Vault Hunters, each with their own abilities, playstyles, extensive skill trees and many customization options. All Vault Hunters alone are capable of unleashing chaos, but together they are unstoppable.

With countless weapons and gadgets, every battle is an opportunity to score new equipment. Weapons with shield-bearing bullets? Do we have. Guns that create fire-breathing volcanoes? Of course. Guns that get legs and pursue enemies, while also calling out curses? Yes, there are.

After Pandora, discover new worlds, each with unique environments to explore and enemies to destroy. Tear through enemy deserts, battle your way through war-torn cities, cruise deadly swamps, and more!

Play with anyone, anytime, online or in split-screen co-op mode, regardless of your level or progression. Team up, defeat enemies and complete challenges, but earn rewards that are only yours – everyone receives loot.